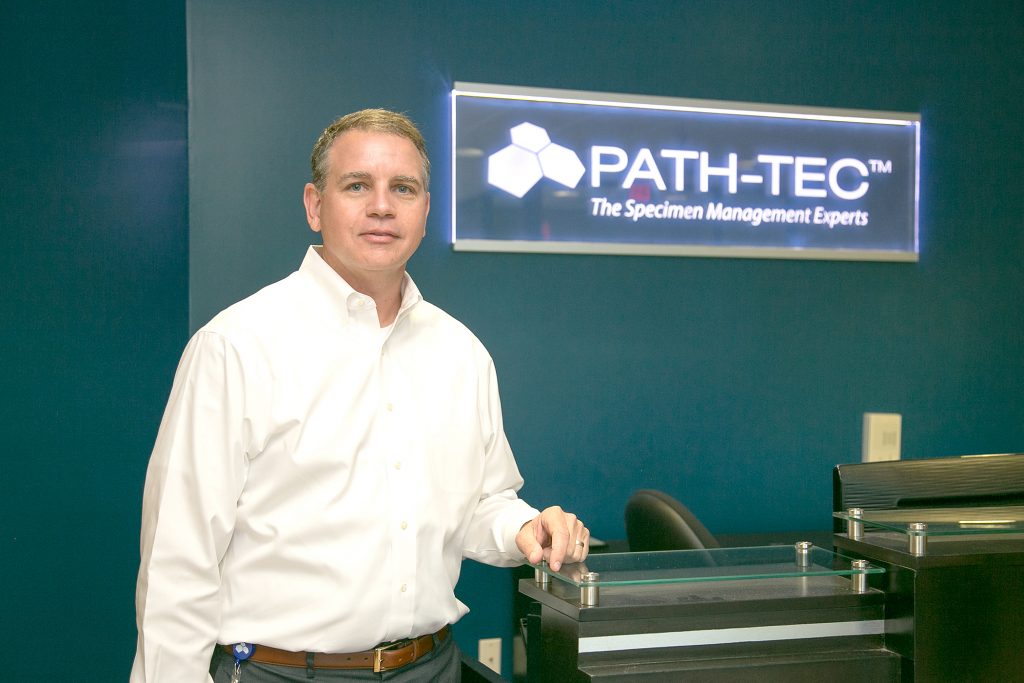 Athens, Ga. – A Georgia company supported by the UGA Small Business Development Center is likely the key cog in getting test results back to your doctor quickly and accurately.

Columbus-based Path-Tec is now a giant in laboratory supplies and logistics, tracking and ship-ping lab kits around the world. For founder Kevin Boykin, it all began in a rented office with a business plan refined by the SBDC.

“What the SBDC does is invaluable,” Boykin said. “They’re able to introduce you to opportunities. The SBDC ties people together with resources. It’s hard to quantify the value of that.”

Those resources have helped Path-Tec become more than just the company that provides a box and tube for blood to one that helps ensure quality patient care through an advanced logistics network. Path-Tec’s sales have grown steadily at about 30 percent per year since 2007 and the company is expecting to eclipse 200 employees by 2019. Already Path-Tec has moved into a new 126,000-square-foot building in Columbus, added a second facility in California and is planning to put roots down in Europe in the near future.

Earlier this year, the U.S. Small Business Administration honored Boykin as Georgia’s Small Business Person of the Year. His company facilitates the collection and transfer of 2 million samples each year for potential organ donors, diagnostics and DNA testing.

“It’s amazing to see that kind of growth from inception,” said Columbus SBDC Director Mark Lupo. “It’s kind of a textbook example of how a business grows into an international company.”

Boykin was one of Lupo’s first clients in 2005. He rented office space in the same building as the SBDC’s Columbus office and the two bumped into each other in the hallways. The SBDC worked on an early business plan with Boykin. He later attended GrowSmart, a course the SBDC offers to companies looking beyond the startup phase.

The course helped foster connections that Boykin is grateful for. At the urging of Lupo, he attended a CEO roundtable that the SBDC runs with Georgia Tech and met other Columbus-area entrepreneurs.

“I didn’t know anybody in Columbus,” Boykin said. “When you’re first starting out, you feel like you’re on an island by yourself without people you can question. The SBDC is there with the experience; they don’t have a bias. They just want you to succeed.”

Lupo also played a role in Path-Tec’s new warehouse by introducing Boykin to the Georgia Manufacturers Extension Partnership, a Georgia Tech program that helped design the building to maximize workflow.

“You put someone that has Kevin’s drive, integrity, creativity into an environment with other business owners and that helps stimulate relationships and ideas,” Lupo said. “We might have just one small piece of that puzzle, but it’s a positive contribution which has a ripple effect in the employees he hires. We’re helping the community be stronger by assisting business owners like Kevin.”